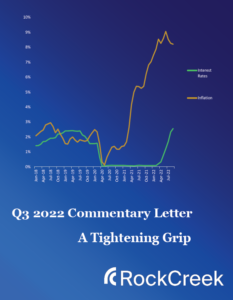 The summer began with a strong rally in US markets. By quarter’s end, that bounce was but a distant memory.

As we enter the final quarter of 2022, investors have again wondered if central banks will stay the course. Signs are accumulating of slowing global growth. Finance officials from around the world shared gloomy assessments of the outlook in October at the annual Washington gathering for the meetings of the World Bank and IMF, where RockCreek took part in the discussions.

In July, financial markets shrugged off the battering of the first half of 2022, hoping for a pivot to easier money. By September, reality had set in: central banks have a lot more tightening to do. As interest rates marched higher, and the Federal Reserve grew steadily more hawkish, both equities and bonds suffered. By the end of the quarter, the S&P 500 finished down 5%, bringing the overall year-to-date drop to nearly 25%. For US equities, this marked a third consecutive quarterly fall – a first since 2008.

Will this outlook tempt central banks to ease up? Our short answer is no. At RockCreek, we continue to believe the Fed will keep its focus on fighting inflation, waiting for clear evidence – and consensus – that price stability is in sight. Reaching the Fed’s 2% inflation target will take some time and will likely involve economic pain, as Chair Jerome Powell acknowledged in September. He and his colleagues spent Q3 trying to shore up their inflation fighting credentials in both words and actions. They want no doubts about their commitment creeping back into markets.

But while we see more restrictive financial conditions ahead, we expect that debate may build around the pace of tightening. So far, the Fed has moved with record speed to raise rates, breaking with past practice of gradual 25 basis point moves and delivering three consecutive jumps of 75 basis points each from June to September. Speed was appropriate with credibility at stake and a starting monetary stance of considerable ease.

Rapid changes, whether in markets or in life, are hard to manage smoothly. But Chair Powell and colleagues are keen to bring down inflation. But they have no wish to see financial instability.

Against this backdrop, RockCreek sees three themes continuing to play out for the rest of this year:

Subscribe to our newsletter
For updates on our latest articles and blog posts, plus any great additions we make to Works in Progress, subscribe to our monthly email.

At COP26 last year in Glasgow, we saw big pledges – Net-Zero pledges from countries and companies; $130 trillion of private capital represented in the GFANZ coalition pledged to accelerate the de-carbonization of the economy. But that world, one of easily available capital and peace in Europe, no longer exists, and we have seen a resetting of expectations from many of the major players, both on the public and private side.

The second quarter of 2022 was when reality sank in. Might we be headed back to the future, when inflation – and the fight to curb it – dominated the macro background? A slowdown is inevitably coming. Can the Fed, against the odds, succeed in cooling the economy sufficiently to bring down inflation without a sharp rise in unemployment?

The beginning of 2022 was a time of firsts. War in Europe, inflation at 40-year highs, and the start of a monetary tightening cycle across major economies coincided to knock equity markets back and trigger a sharp correction in bond prices in Q1. Looking ahead, investor caution remains warranted, but opportunities can, nevertheless, be found.