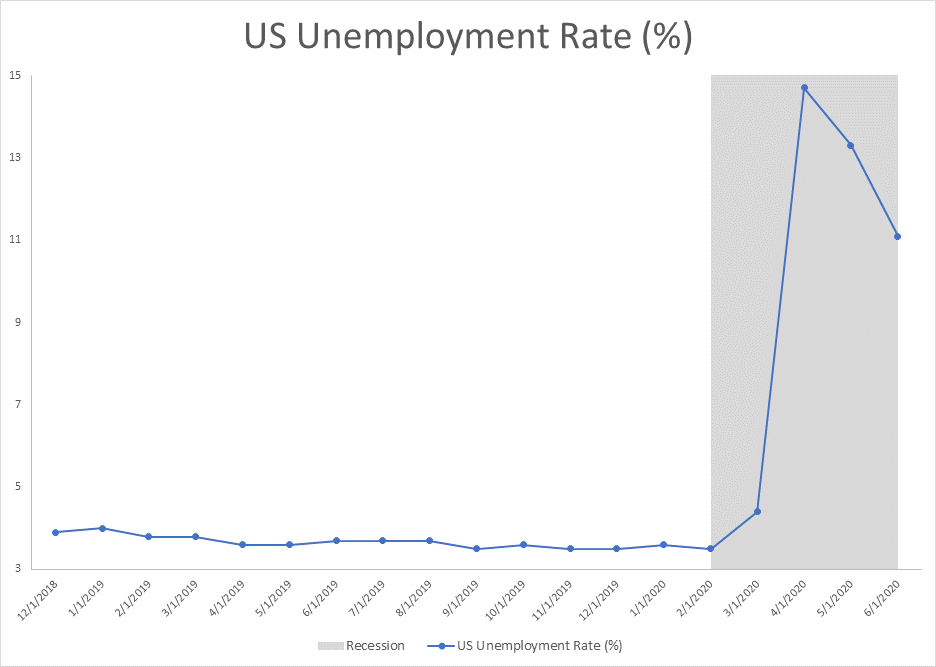 After the steepest economic slide in history pushed unemployment towards Great Depression levels, the economy bounced back in May and June – but the jump in jobs still left millions of Americans out of work. The twists and turns of the economy since Covid-19 have been hard to understand, never mind predict. As Laura Tyson says in the latest episode of RockCreek’s Finance Forward podcast, this is not a normal recession, brought on by economic and financial imbalances. The shut-down in March and April put a then-still healthy economy into something more like a coma.  Now, the issue is what happens as the patient is waking up.  We are learning that Covid-19 can have long-lasting effects on some patients.  Can we avoid similar damage to the economic and social fabric of society?

1. The economy is recovering as consumers and businesses go back to spending; they need more help from the government to keep it up

The disconnect between financial markets and the real economy remains stark. Fed actions, and words, on monetary policy have spurred market confidence to a remarkable degree. By end-June, the tech-heavy Nasdaq was actually up from the end of 2019, by nearly 13%, while the S&P 500 was just 3% down over the six  months. And Q3 is beginning with a bang. To bolster confidence among consumers and business, and thus the real economy, Congress and the White House need to do more on fiscal policy, and soon.

The speed of the US turnaround in May and June – as payrolls jumped, retail sales picked up and survey forecasts became less gloomy – both reinforced market strength, and weakened political resolve to agree on another pandemic bill. This may change in the coming weeks, as the need for more stimulus to hold up the economy becomes clearer. Without more government support, the millions of Americans still without work will be forced to curb spending again as money runs out from stimulus checks and temporary unemployment help ends.

2. Do we even know what is happening in the American economy?

Given the speed of change in the economy, as well as in the retreat and spread of the virus, analysts are looking intently at real-time measures of activity, from credit card spending to restaurant bookings, to air travel, or mobility data gleaned from smart phones.  These data now suggest that growing infections – and the consequential halt to reopening in some parts of the country – may have stalled recovery in mid-June. But the connections of new real-time data to business activity, GDP and incomes are uncertain.

Even official statistics have become hard to interpret in these strange times. Take payrolls and unemployment, where two different official measures were released on the same day last week. According to the Bureau of Labor Statistics’ monthly report, released July 2, unemployment fell across the board in June and US payrolls jumped by nearly 5 million, after an upwardly revised 2.7 million in May.  But a separate, weekly, report showed another 1.5 million Americans had filed new claims for unemployment insurance the previous week, with close to 20 million still on traditional unemployment benefits. A further 12 million jobless are collecting benefits under the Cares Act Pandemic Unemployment Assistance (PUA) that expanded coverage to some self-employed and gig workers.

So, which is right? Timing may explain part of the difference – the Bureau of Labor Statistics (BLS) monthly survey was carried out in the first part of June, while unemployment insurance claims were more recent.  Coverage is also different. The response rate to BLS surveys has been unusually low, and there has been some confusion about how to report furloughs. The agency believes that the May and June reports may have under counted how many were out of work.  At the same time, the claims numbers may be swelled by the Department of Labor instructing states to relax rules on checking whether claimants have other incomes in order to speed up payments. So the numbers may count some who are employed part-time as out of a job.

3. America versus the rest: reopening was always risky, but did it need to go so wrong?

It is sobering to see how much better all other advanced economies have managed the move out of lockdown than the US.  In China and North Asia and, more recently, in Europe, new infections remain low and apparently contained.  In contrast, the virus cut a swath across the US last week as cases rose in 40 out of the 50 states. What has gone wrong, and can it be fixed in time to save the economy before a vaccine is available — whether optimists are right that this could be in six months, or the pessimists that it will take longer?

One key problem was in opening too fast and too soon, before the disease was really brought under control.  And another was in the messaging – mixed at best, or politicized at worst – about the importance of our behavior in curbing or spreading disease. Ironically, while reopening the economy was intended to promote economic recovery, it seems likely that at least some of the activities that have jump started infections were not closely linked to boosting the economy. Social gatherings – and political rallies – where people ignored the health advice to wear face coverings and keep social distance were culprits in some recent “super spreader” events. Crowded indoor bars didn’t help.  And of course, some of those falling sick had little escape from work that was deemed essential – or needed to survive – or from confined environments such as nursing homes and prisons.

Optimists would argue that even skeptics are seeing the consequences now, and a sea change in behavior could help to curb outbreaks. This would be more plausible if we had the widespread testing, tracing and quarantining in place that other countries have managed.  Some states are closer than others.

4. Technology is still a winner for investors.

Markets finished the holiday week with a bang as large cap growth – particularly technology stocks – continued to soar. At RockCreek, we have been investing in higher quality growth stocks in our equity portfolios since before Covid-19 and the theme continues to be a winner. The NASDAQ 100 ended last week more than 600 points above levels it was at when the pandemic induced market crash started and is now in positive territory for the year at +18.4%. While some investors have been skeptics towards this group of companies, others have recognized that the largest US companies are the ones profiting the most from the pandemic. Whether it be from the stimulus package bidding up the corporate debt of the largest companies, or these companies gaining market share and competitive advantage across e-commerce, work from home trends or other technologies, big tech firms have been the winners in the aftermath of the pandemic. The question now is whether these stocks are poised for a correction or whether these cash rich companies with strong balance sheets and growing revenues continue to benefit from the same trends. One thing to consider is that the underlying earnings power of the NASDAQ 100 companies is almost five times as big as it was 20 years ago.

Not surprisingly, momentum and growth continue to be in favor with hedge funds net buyers of technology during the month according to prime brokerage reports. The data showed similar trends across Asian buyers in June with exposures to technology remaining elevated. Currently, net exposure to the technology sector is at the 99th percentile since 2010 and 87th percentile over the last 12 months according to Morgan Stanley’s latest data.

Technology is not only a public market investor darling but dominating the private markets in terms of activity, deal flow and valuations. After a pullback in March and early April, private markets deal activity appears to have resumed with some GPs indicating that valuations have climbed back to pre-Covid-19 highs – at least for higher quality businesses. The variety of investment structures being utilized by GPs, particularly as it relates to structures with embedded downside protection across certain technology companies is an indication of the need for creativity from private investors in these markets. Deals have included investments in public companies like Twitter and Expedia Group via a convert and preferred equity. Our private investments in food sustainability, real estate logistics, affordable housing and those at the intersection of technology, health and education continue to be a positive area for portfolios.

5. There are other opportunities worth noting

While higher quality, cash flow strong companies have been  the bright side in the turbulent market, some of those left in the dust may become interesting opportunities. Recent US high yield offerings with either low ratings, or from issuers in impacted sectors that are expected to recover after the pandemic, have been pricing strongly – and not just as a result of the Fed bond-buying program. While the stimulus package has been a strong signal and floor for the market, robust demand may also be because of the inclusion of a novel ‘bankruptcy make-whole provision’ in certain bonds.

6. After an extraordinary first half, what about the next six months?

As we finish the first half of a turbulent 2020, equity markets may not be indicating a changed world but companies, industries, and the economy are sending a very different signal and caution for the second half of the year. During the first 2 quarters of the year, 3,427 US companies have filed for Chapter 11 bankruptcy, – 2% shy of numbers we saw the first half of 2008. While the $2.2 trillion in government stimulus has likely suppressed bankruptcy filings till now if the stimulus sunsets by August, we could well see an acceleration of business failures in the second half of the year. Especially among highly levered smaller to mid-cap companies that will have difficulty tapping the public markets. This could have a ripple effect across the broader equity and credit markets – especially in the US and another reason for diversification, hedging and flexibility in portfolios.
We hope everyone had a safe and relaxing holiday weekend. Every Fourth of July, Carnegie Corporation of New York honors naturalized American citizens who have strengthened our communities and enriched American life. RockCreek Founder and CEO Afsaneh Beschloss has been honored as one of this year’s Great Immigrants.

The RockCreek team continues to work remotely, with our operations continuing seamlessly in this virtual work environment. We have remained close with morning coffee sessions, book clubs and guided meditations. As we sharpen our re-entry plans, we continue to follow the advice of health professionals and community leaders in planning for the appropriate safety guidelines.

The RockCreek Summer Analysts have quickly adapted to this virtual experience and continue to join daily investment meetings, global conferences and events. We are excited to see these students’ creative and innovative contributions as the summer continues.

Our team and partners continue to search for ways to support organizations that are assisting communities during this time of need. Please let us know if you are aware of any opportunities and ways in which we can get involved.

What to Read Next

Sideways Shuffle as an Era Ends

Gender Lens Investing: How Do DFIs Do It?